LIBOR Fallback is not a curve change, its is a contract change!

In recent consultations, ISDA has proposed a new definitions for the LIBOR fallback. Similar definitions will probably be adopted by CCPs. The exact definitions have still to be clarified (LIBOR tenor or calculation period, calendar for 2 day shift, etc.), but the global idea is to replace a forward looking LIBOR by a backward looking composition on a different period. In previous notes and answers to the consultations, we have explain why the fallback cannot be applied exactly as described in the consultations, some new workaround will be required. Once those clear definitions are available and achievable, how do we include them in our pricing library?

The striking element of that change is not the change from one rate to another but the complete change of the LIBOR-linked derivatives term sheet. The term sheet is changed from a single rate known at the start of the period (or even 2 days before) to a combination of multiple rates known at (or around) the end of the period. This change of term sheet has a direct implication in terms of systems and valuation techniques. It is not possible to look at the fallback from a change of (forwarding) curve perspective. Yes a different curve will be needed, but this is only a very small issue. The main issue is that you have to dynamically change the instrument term sheet. By dynamically, we mean it is not a simple one-off re-booking of the trade in the systems. You may want to do the re-booking once the cessation has taken its full effects, by in the mean time you have to take the trade with its current description and do a what-if type analysis by changing the trade temporarily. The discontinuation date is still uncertain, so you need to do that transformation temporarily (in memory) and have the capacity to do it for several cessation dates, several spreads, several fallback definitions, etc.

This requirements is exactly why we developed the

We have seen some vendors proposing spread adjustment to RFR curves to price LIBOR swaps in the fallback. This is fine as a toy model to have an overview for vanilla swaps. But if you want a real in depth analysis, how does it work? How do you represent the 2 days shift effect, in particular when the 2 days cover a quarter-end, a year-end or a FOMC meeting? How do you include the difference between LIBOR tenor and calculation period? How do you include the jump on forward rate on the discontinuation date?

The decision to go the "transformer" route was not a random one for us. It was based on several prototypes in a production grade library and running detailed impacts on test portfolios with a market maker requirements in mind. Getting the general level correct by a shift is fine for a first global overview. The next step is to look at the details, at the pricing of short term instruments covering the transition expected date, at the impacts of date shifts, the exact curve shape at each intermediary date, etc. That can be done only by working on the instruments, not on the curves. Each instrument has its own idiosyncrasies that cannot be faked by a curve manipulation.

The inclusion of the jump on forward rate on the discontinuation date is particularly interesting for the moment. The current OIS/LIBOR spreads are very high with respect to the historical median. There is a real impact there. If you have a "fallback curve", how do you represent that? You could say that you would use a technique similar to the one you use for central bank meeting dates jumps. But unfortunately the impact is of a completely different nature. On the day before discontinuation, you have a forward looking LIBOR that covers 3 months. If you use a pseudo-discount factor approach to your LIBOR curve, you have a LIBOR curve for the next 3 months at the LIBOR level. For the 3 months RFR-based forward starting the next day, you need a RFR level (plus a fixed spread). But that RFR rate has an overlap of 3 months minus one day with the LIBOR. On that period, which rate do you use for the pseudo-discount factor curve? The LIBOR level or the RFR (+ spread) level? Today the UD-LIBOR-3M/OIS spread is around 75 bps while the historical median is about 25 bps. There is no way to get away from the contradiction between the levels with a curve approach. There is no reason to expect a convergence of LIBOR to RFR+spread as we appraoch the discontinuation date. And this is only for one single vanilla LIBOR payment, without even looking at the shift, period and composition issues. Even if the LIBOR had a fallback to a clean RFR term rate, this curve approach would not work at the transition.

We advice LIBOR-linked derivative users to implement the "trade transformer" approach in their internal libraries. Using curve based approach is running the risk of a nasty surprise when the actual cessation comes. 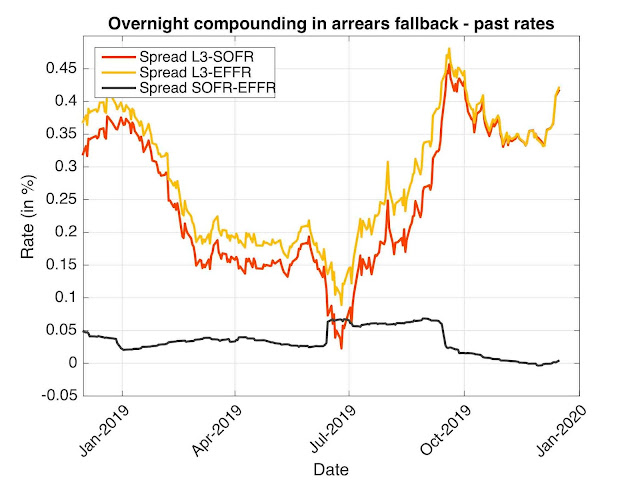 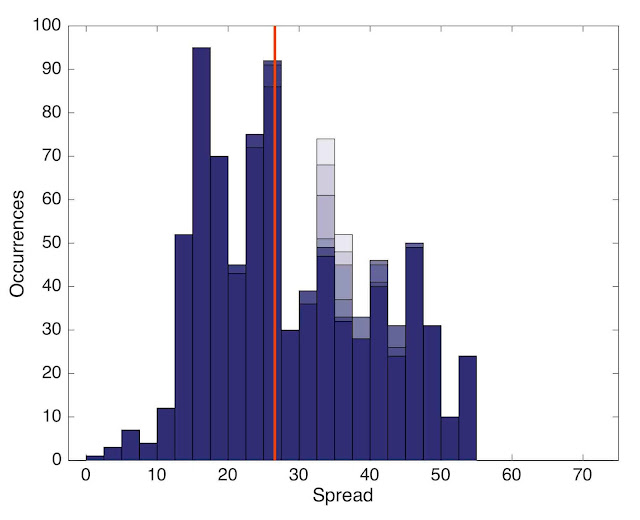 Figure 2: Distribution of realized spread between USD-LIBOR-3M and SOFR compounded with teh current median. The most recent realizations are in lighter colours. The most recent ones are mainly above the current median and we can expect that the median will increase in the coming months. More details are available in the previous post LIBOR Fallback: a median in a crisis.


We have done many other developments around the analysis of valuation and data in the context of the LIBOR fallback. This includes analysis of value transfer impacts, forward spreads, minimum and maximum spreads, discounting big bang, estimations based on forward curves with calibration using spread control (see Curve calibration and LIBOR-OIS spread).

Don't hesitate to reach out to discuss how those developments could be of interest in the context of the management of your portfolio.
Posted by muRisQ Advisory at 16:53