With the disappearance of EONIA (at least in the cleared world), ESTR continues in line with previous weeks. 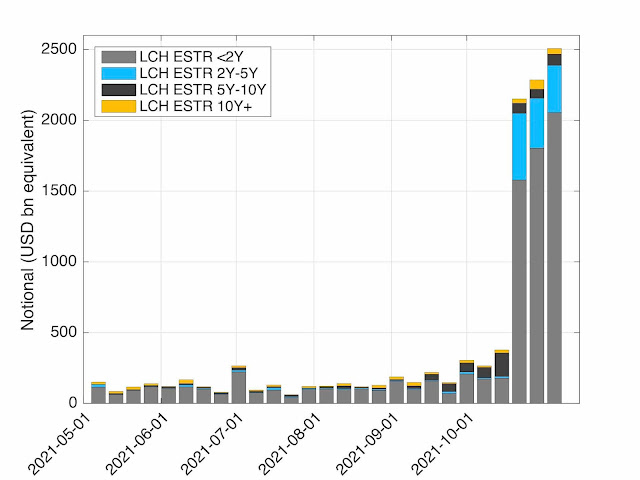 SOFR also continues to progress. But still below 15% of the IR derivatives (as reported by ISDA Swap Info) and far away from SOFR first. 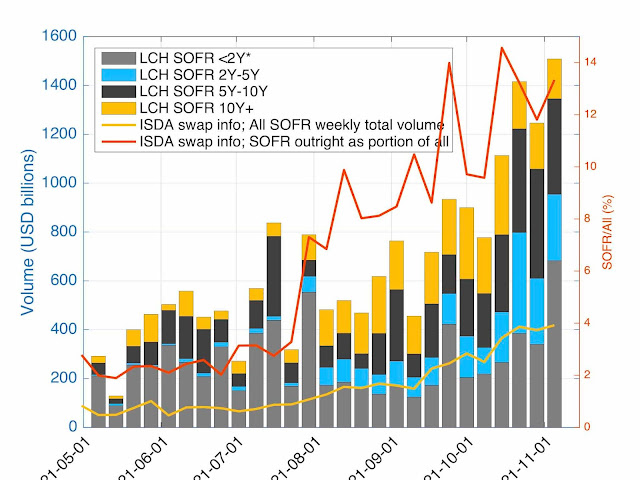 CHF-LIBOR is disappearing in roughly 6 weeks. SARON, its only competitor, continues to progress slowly. We would not say it is a complete victory yet. 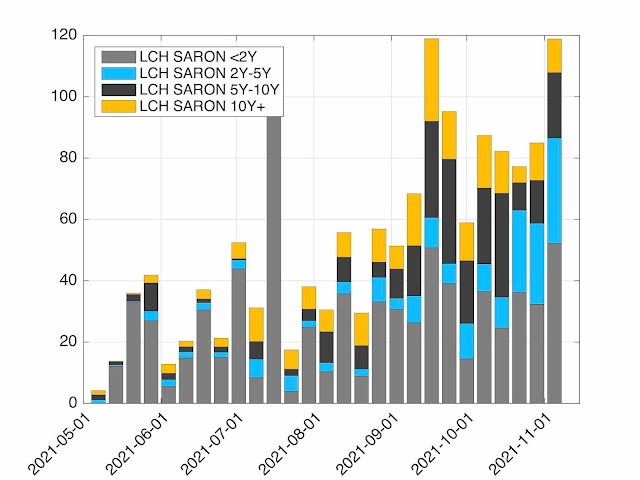 On the Exchange Trade (Futures) side, LIBOR is still the USD leader, by a wide margin. 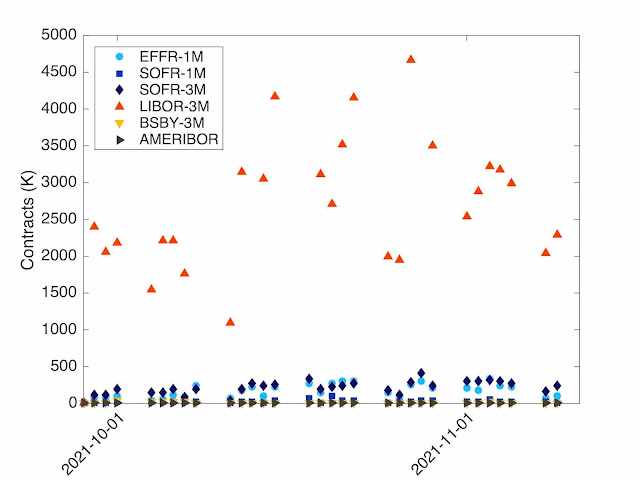 If we zoom in on the alternatives, we see a host of other contract types. Beyond SOFR, there is EFFR, BSBY and AMERIBOR. The good old Fed Fund futures (1 month, arithmetic average) is still the most traded contract after LIBOR on some days. The volumes for BSBY and AMERIBOR are significantly smaller by not completely negligible. They also help to assess the value transfer embedded in the LIBOR fallback. 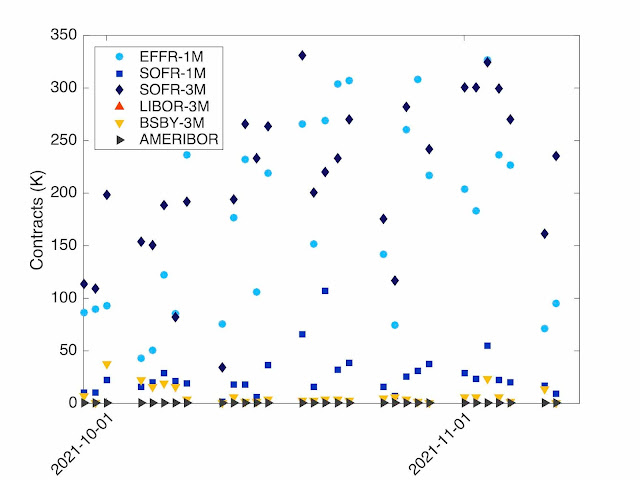 Hypothesis 1: Financial institution not ready for SOFR futures. This can be due to valuation and risk (SOFR futures have a different convexity adjustment and a different apy-off) or operational (settlement is at the end of the period, based on compounded rate) issues. Trader would use LIBOR futures because their institution cannot cope with SOFR futures, even if they know that they are not really trading LIBOR futures. They hope than in the next 18 months their institution will be ready, but clearly they are not ready yet.

Hypothesis 2: Trader have a very good understanding of the issue but believe that there is still a chance that USD-LIBOR will not stop at end of June 2023. The LIBOR futures are trading at the ISDA/Bloomberg spread to SOFR futures. They can be seen as a free option on the non-cessation. If everything goes as planned by regulators/IBA, no loss; if cessation is postponed, a big profit (if the position is in the right direction). But that would be a one sided bet, who is taking the opposite direction? People certain of the transition? People not aware of uncertainty in the transition? People not aware of the transition?

I don't know which of the two is true or if a third hypothesis should be incorporated.

SOFR is certainly taking some volume from USD-LIBOR. But BSBY is also coming to life. A little bit of volume on the futures side (7,500 ADV or so) and commitment by the two main USD Swap clearing houses (CME and LCH) to start clearing BSBY IRS by year end. The USD Game of Benchmark is on, now more than ever.

Posted by muRisQ Advisory at 17:17 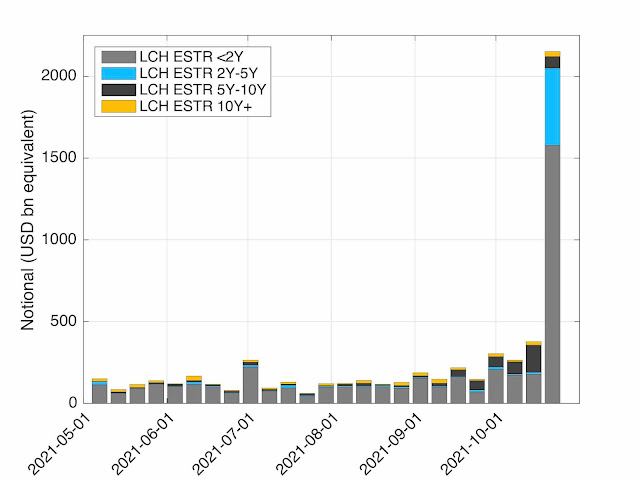 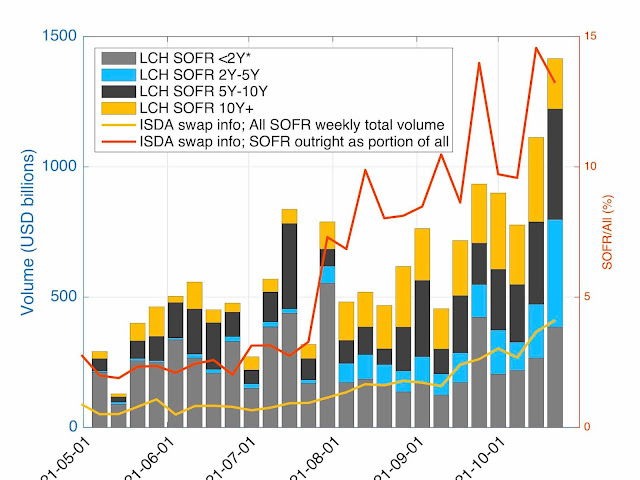 Posted by muRisQ Advisory at 12:09

Sterling and dollar working groups have proposed fallback for ICE Swap Rates (ISR) based on the mechanism used for LIBOR itself. It is not possible to create a ISR's fallback coherent with the LIBOR's fallback. Or more precisely it is possible (and easy) for a quant to do so, based on the swap market globally, but it is impossible for a lawyer in a definition involving only one number published on a single screen.

The impacts of those fallback go beyond simply printing a formula on a piece of paper and have profound impacts on the valuation and risk management of existing instruments like swaptions.

In particular cash settled swaptions with collateral discounting have a triple problem:

The incoherent spread was discussed by Marc in a previous blog: LIBOR transition: How to lose money, automatically!

In a forthcoming paper, we will show how those swaptions can be priced.

The one line summary of the pricing method is a change of strike in line with the non-linear rate transformation and a replication similar to the one used in CMS pricing.

Some early results have been presented in LIBOR transition workshops. A more detailed seminar related to the swaption pricing will be presented at The WBS 17th Quantitative Finance Conference.

Below we already proposed a graph that displays the non-linearity impact, the exact meaning of which will be discussed in the seminar. We will post a link to the full paper once published. 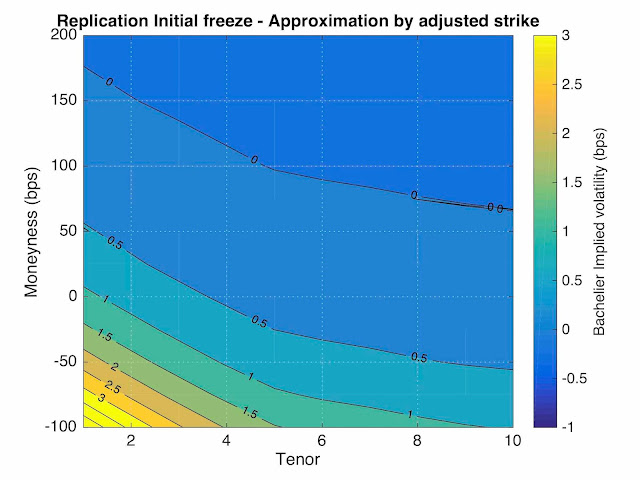 Note added 20 October 2021: A preliminary version of the results were presented at The 4th Interest Rate Reform Conference today.

Note added 20 October 2021: I have added the ICE Swap Rate fallback formulas to my open source library muRisQ-ir-models at https://github.com/marc-henrard/muRisQ-ir-models/blob/master/src/main/java/marc/henrard/murisq/pricer/generic/FallbackIsrUtils.java.

Posted by muRisQ Advisory at 12:23

Usual review of SOFR volumes. After a small increase a couple of weeks ago that lead us to ask "Is something happening?", we are back to levels below mid-July level at LCH. ISDA figures indicate that SOFR is back to less than 10% of interest rate derivatives volume. 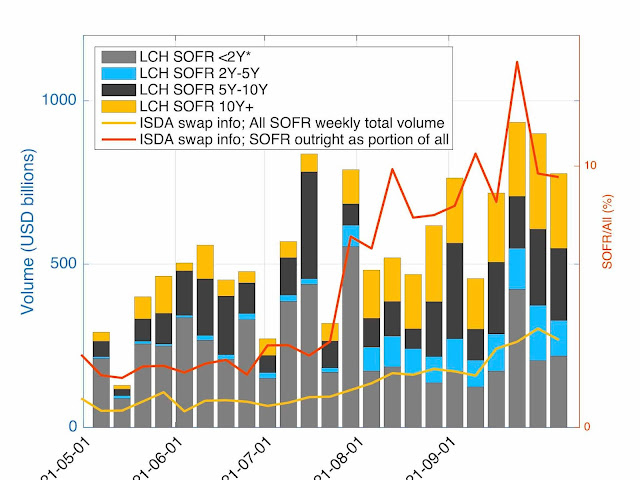 No real progress a little bit more than two months before the expected deadline for "no more LIBOR".

Short term swaps (less than 2Y) volume is not increasing either, which is not a good indication for the development of Term SOFR rates.

Posted by muRisQ Advisory at 10:12

SOFR: Is something happening?

Weekly volumes of interest rate trades. Is SOFR slowly waking-up? Weekly volume last week are the highest ever, higher than mid-July. ISDA reported figures (US only) have the highest percentage of SOFR outright volume (almost 14%). 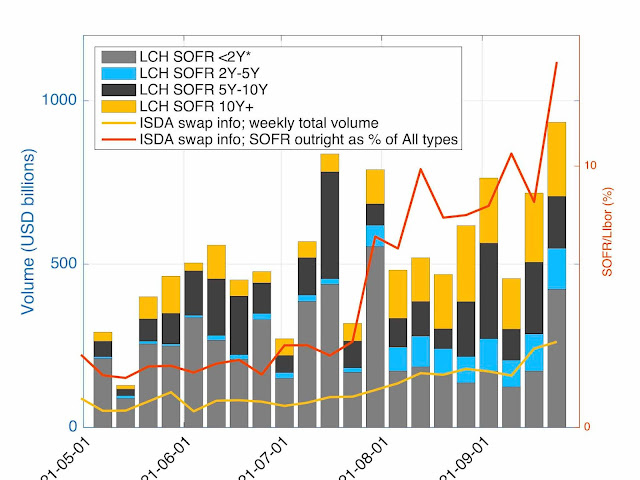 Note that we have change the definition of relative portion in the graph. The outright SOFR is now reported as portion of all trades, not portion of LIBOR trades. This is to avoid "infinite" results when LIBOR will disappear. The portion is now capped at 100%.

Posted by muRisQ Advisory at 10:17

Presented without comments this week. 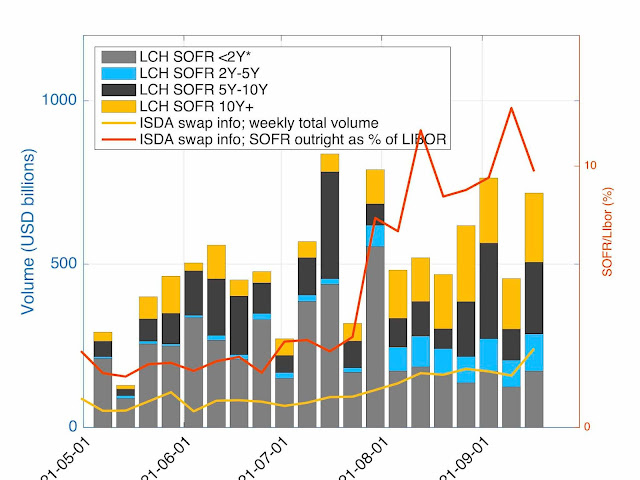 Comments on ESTR, SARON, and SOFR to come later!

Posted by muRisQ Advisory at 09:19 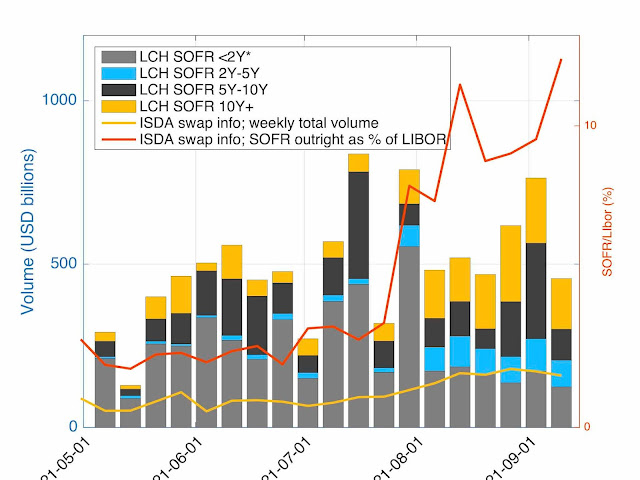 It is not clear what the origin of this is. One potential explanation is market moving out of LIBOR but not to SOFR.

CME futures on BSBY provide a view of market price discovery of SOFR v credit sensitive rates. For those that have not yet agreed on the fallback for legacy LIBOR trades, that opens a window on valuation impacts.

This makes Marc's cautionary tale published in January 2020 edition of Risk even more tangible. It is now possible, to some extend, to measure the exercise value of the protocol option. Marc mentioned the "Fallback protocol as an option" in the past, in particular in the blog "ISDA Fallback as an option".

For the (low volume for BSBY and SOFR) trades on the September 2023 contract (first after USD-LIBOR cessation), the spread LIBOR-SOFR is 27 bps and the spread BSBY-SOFR is 19 bps. The first one is roughly in line with the CME Eurodollar futures fallback using ISDA/Bloomberg spread (26.161 bps), the second one provides the cost of protocol signature for a September 2023 fixing: losing or making 8 bps. Lets wait for more volume on the longer term part to assess more of the value transfer. We will try to provide more data on BSBY in a forthcoming blog.

Posted by muRisQ Advisory at 16:38

No big push since "SOFR First" date six weeks ago. Quite flat volume, both on the weekly figures and on the monthly figures. Using ISDA figures, SOFR outright OIS volumes still less than 10% of LIBOR volumes. 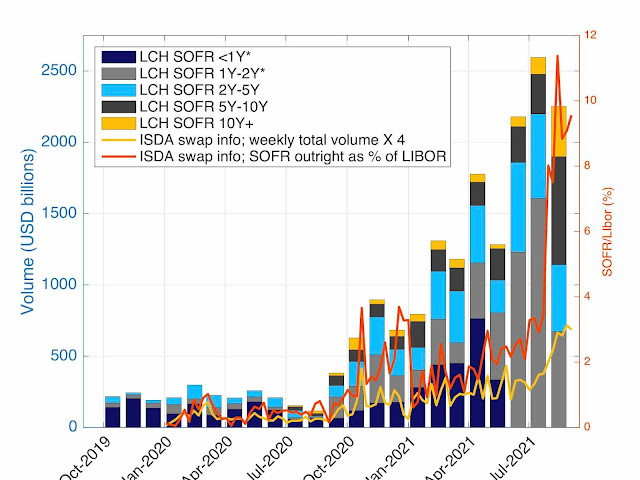 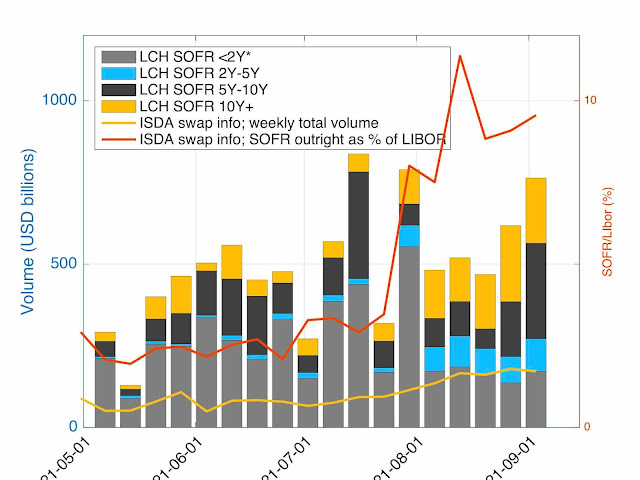 Posted by muRisQ Advisory at 12:46

Marc Henrard will present two workshop with the CQF insiture.

The first one will take place on Wednesday 6 and Thursday 7 October 2021.

Benchmarks in Transition (LIBOR and Overnight).

The second one will take place on Tuesday 9 and Wednesday 10 November 2021.

The agendas of the workshops can be found on the webpages references above.

Don't hesitate to contact us if you want to organise similar workshops in-house.

Posted by muRisQ Advisory at 12:25 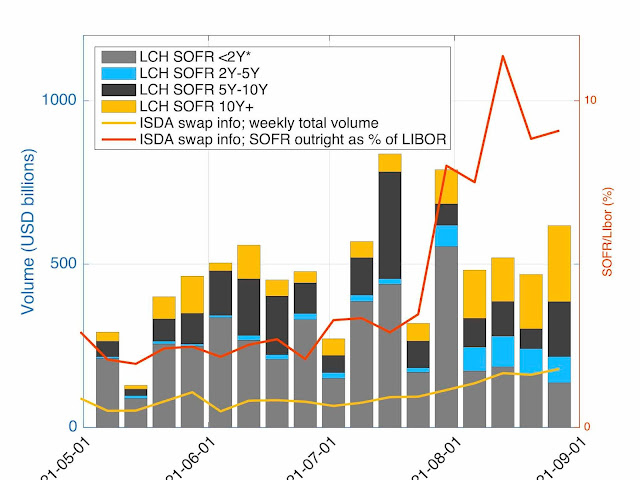 Posted by muRisQ Advisory at 13:44