SOFR in the second week of 2022: slow progress, still "SOFR Third" for OTC

A quick look at the OTC and ETD sides of SOFR for the second week of 2022.

The OTC Cleared at LCH side still reports a "SOFR Third" week. The major change since last week has been the change in First, now going to EFFR slightly ahead of LIBOR. SOFR's share has slightly decrease from 14.8% down to 14.6%. The figures are: OIS-EFFR 41.9%, IRS-LIBOR 37.7% and OIS-SOFR 14.6% (plus some basis, FRA, inflation). We have added the SOFR share at LCH in Figure 1 as the yellow lines (only for 2022 as we have not collected the relevant data in 2021).

Note that the ISDA figures report only LIBOR and SOFR (in particular not EFFR) and is based on US regulatory figures, which is well below LCH figures (dark blue line in the graph, around 30% of LCH volume). The SOFR share around 20% reported by ISDA is inflated due to the absence of the EFFR volume. 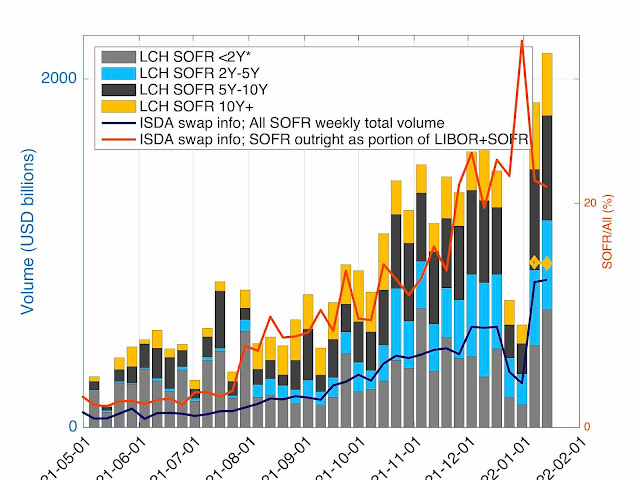 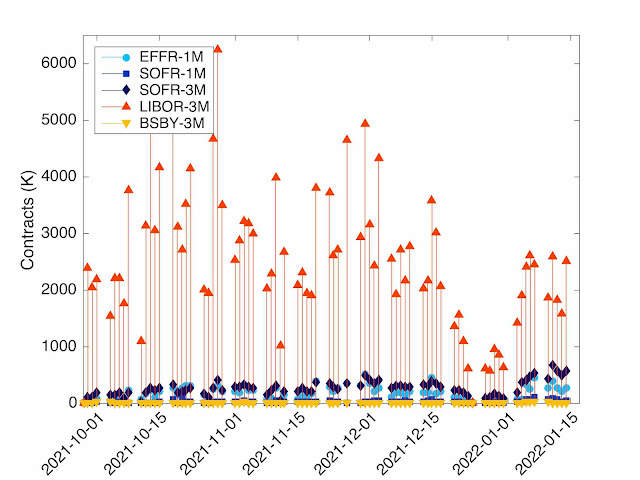 Some news in other currencies at LCH:

EURIBOR still largely dominant with EURIBOR (IRS+FRA) at 79.1% and ESTR-OIS at 18.5% (plus some basis and inflation).

One week in the new year. One week where it is recommended not to use USD-LIBOR for OTC derivatives. From the figures published by LCH, this is far from being the case. This is not dissimilar to what is happening with the futures, as described in a previous blog: SOFR Futures: LIBOR dominates!

The OTC derivatives podium, from Gold to Bronze, is LIBOR IRS 41.3%, EFFR OIS 39.8% and SOFR OIS 14.8% (the rest is basis, LIBOR FRA and inflation). Even in the OIS category, SOFR is less than one third of the market.

The absolute figures for SOFR are provided below. The ISDA Swap Info for the first week of 2022 was not available at the time of writing this blog. 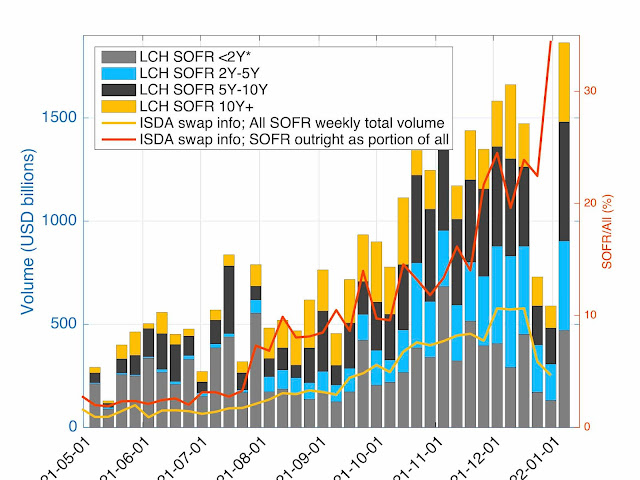 The title of the post may look like a typo, but it is not. For the first days of the year, among the STIR futures settling against SOFR, the ones with a LIBOR name still dominate. The post-June 2023 LIBOR futures will be converted around June 2023 into SOFR futures (with a known spread of 26.161 bps). The final settlement of those is thus SOFR based, even if they still have a name with Eurodollar LIBOR. 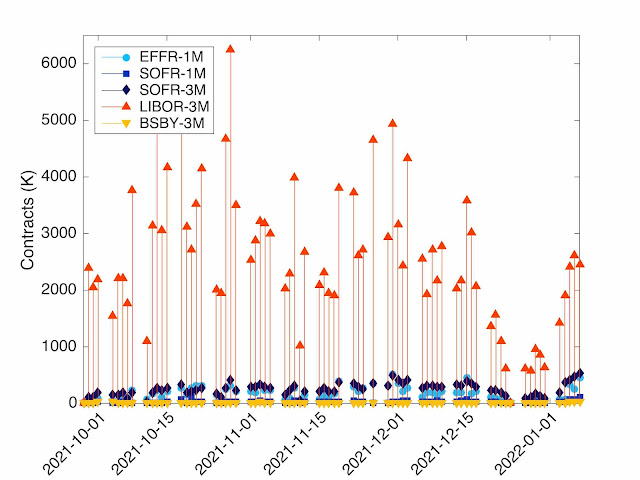 The LIBOR volume does not correspond to risk reduction as the LIBOR Open Interest have increased by 100,000 contracts since 31 December 2021.

We don't know why such a trading pattern exists, but we conceive that it could be a way to hide the complexity of the new product behind an old name.

Note that on the cleared side, LCH indicates for the first week of 2022 43% IRS (LIBOR) and 57% OIS (SOFR and EFFR). The split between SOFR and EFFR is not published yet but it looks very likely that we are not yet at SOFR First. 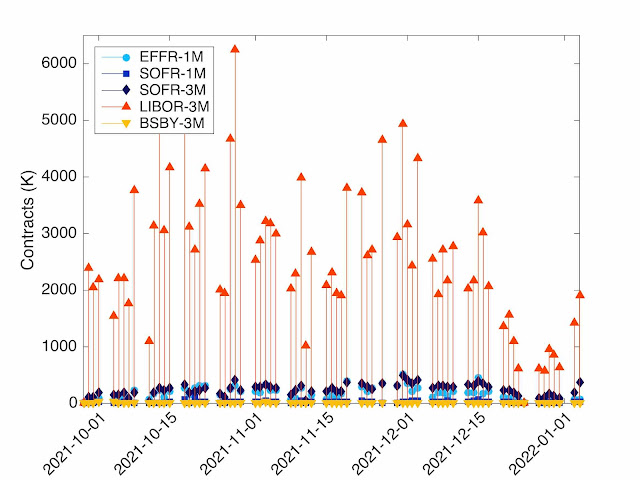 The transition from LIBOR futures to SOFR futures is far from being trivial from a risk management and model validation perspective. There are at least three elements that should be validated before continuing trading the LIBOR futures with post-June 2023 expiry.

If you are trading LIBOR futures or SOFR futures, maybe a new model validation for the valuation and risk management of those instruments would be appropriate. If this is the case, don't hesitate to contact us. We have researched, published articles and developed related libraries. We can provide a rapid access to the foundations required to the assessment and validation of those market changes.

SOFR certainly did not come to an end. The volumes continue to increase. LIBOR did not come to its end either. On the week before its announced demised, it still dominate the USD interest rate market.A couple of days ago, we published some figures for the USD STIR futures at CME. LIBOR was still around 80% of the market and SOFR coming second with around 14%.

LCH and ISDA have now published their numbers for the last week of 2021. 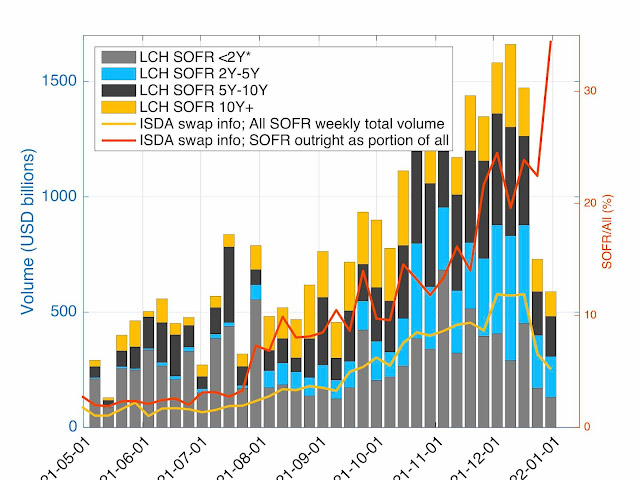 As expected, over the last 2 weeks of the year the general transaction volume was a lot lower than in the previous weeks. This is reflected in both LCH and ISDA figures. On a relative basis, SOFR is now in the ISDA figures (US regulatory figures) at around one third of the market. Still not at the SOFR First mark, but coming closer. It is difficult to assess if this is a US only effect or a global effect.

Early 2022 figures at LCH indicate that OIS (SOFR and EFFR) is around 72% of the market while IRS (LIBOR and BSBY?) is around 23% (the rest is basis, LIBOR-FRA, inflation). The split between SOFR-OIS and EFFR-OIS is not published on a daily basis. We will have to wait the weekly statistics to see it. But there are early indication that this week could be the first week of the real "SOFR First" for the cleared market.

The end of year numbers indicate that LIBOR is still by far the dominant short term interest rate (STIR) futures (at CME). 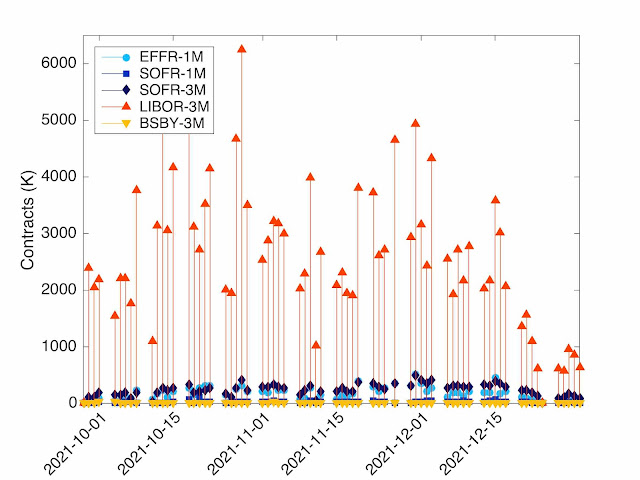