New publication: Description of overnight floaters with principal adjustment and its advantages

A new working paper related to fallback and composition for bond has been made available on SSRN. The paper title is

Description of overnight floaters with principal adjustment and its advantages.

The paper is available on SSRN at

Interest rate markets are moving away from term benchmarks to embrace overnight benchmarks more widely. This has created an issue for bonds and loan markets as direct application of the overnight standard mechanism, the composition, leads to coupons that are known only at the end of the accrual period. We provide a precise description of a less known convention for those products which has the same level of complexity that the direct method but has the important advantage to lead to coupons that are known at the start of the accrual period for all but the last coupon. This simple convention is apparently misunderstood, including in official regulatory documents, and it appears that a systematic description and formal analysis of its valuation and risk mechanism would be beneficiary for the market. 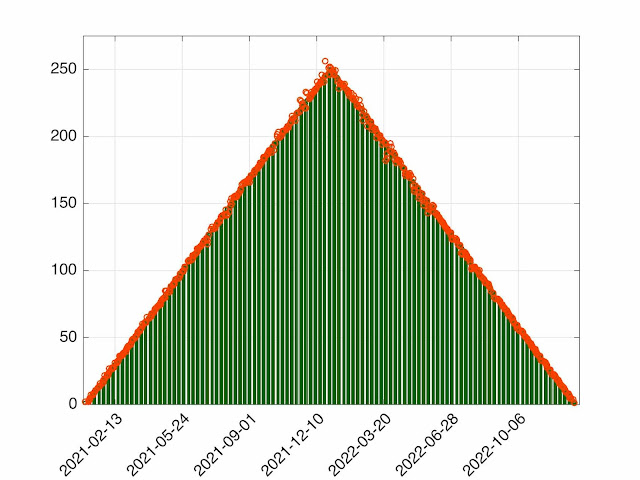 For the origin of this graph, see Fallback transformers: gaps and overlaps.

We compute estimates of the historical spread adjustment for USD-LIBOR on a regular basis. The data below is as of 2020-12-22.

Contact us for more details on the hypothesis and methodology used.

We can provide production grade code that run those estimates on a daily basis. 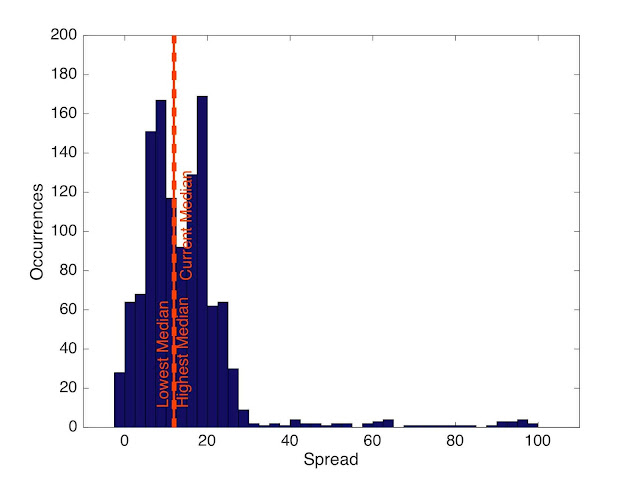 Figure: Distribution of USD-LIBOR-1M / USD-SOFR compounded in arrears over 1M.

Marc Henrard will be a keynote speaker and panelist at the

oranized by The Université de Paris. The workshop will take place online on Thursday 21 January 2021 at 18h00 (Paris time). The attendance is free. The details of the workshop can be found on the organizer website:

Added 2021-01-05: An earlier version of the post indicated the presentation would take place on 11 January. The date has now be move by 10 days.

Marc was quoted in the press in an article related to the EONIA/ESTR transition: Authorities renew calls for €STR take-up (subscription required).

Since the publication of ISDA's supplement 60 to the ISDA 2006 definitions, all new Eonia trades have a robust fallback – therefore the lack of adequate fallbacks isn’t an argument for new trades, and switching old contracts won’t help the take-up for new ones,” said Marc Henrard, managing partner at muRisQ Advisory.

“What concerns me, however, is the ability for systems to handle the Eonia fallback. I would strongly encourage people to move to €STR, but I expect Eonia curves to stay in banks’ systems for several years – even after January 2022." "Admitting that systems cannot cope with the fallback is, in my sense, a stronger argument than the others for switching to the RFR,” he added.

The ECB also said it considered publishing compounded term rates based on €STR as well as a daily index to encourage a wider adoption of the rate. “I don’t see how this would be used in practice, except for some retail products,” said Henrard. “From a daily perspective for financial institutions, I don’t see how it would fit in. It would certainly generate problems as opposed to solving them. If there was any use to this, it would have probably been implemented for Eonia 20 years ago.”

Description of ON floater with hybrid rate payments and its advantages

In this section we provide more details about the hybrid approach to the term sheet of bonds and loans. This is based on compounding in-arrears mechanism but with improvements that make them easier to deal with, specially in relation to the forecast of cashflows at the beginning of each period. This approach has been previously described in a December 2019 blog : Compounded rate out of favour: what now? (2).This type of approach may have been described before, but the author is not aware of any related literature.

At start of each period, a fixed rate is decided for the period. This rate is not a definitive rate, but an advance on interest rate. At the end of the period the standard compounded in-arrears rate is computed. The difference between the compounded rate and the advance is added to the notional to be repaid.

The way the rate fixed at the start of the period is not very important. Its impact on valuation or risk management is minor; it is of the same order of magnitude that a spread above compounded rate.

For a period notional Ni, the compounded interest amount is

The interest rate paid on the end of period i is Ri. The rate Ri is Fti-1-measurable, i.e. it is decided at (or before) the period start. After that period, the notional is adapted with

The total cashflow equivalent in ti is this the interest paid plus the notional increase. This is equal to

At the end of the last period, the amount repaid is notional plus interest, i.e.

Whatever the choice for Ri is done, in all cases, the periodic payment at each coupon date is equivalent to a compounded rate. The final payment include notional plus compounded interest. The notional is slightly change at each period but that does not bring any complexity as the rate is the fair rate for the period. It is not more complex than a loan/bond with variable notional paying floating fair coupon.

The valuation and risk analysis above is valid whatever the rate Ri is selected. It can be some last reset ``in-advance'' composition, last recent or even a random number. For operational purposes, it is enough that it is selected at the start of the period and for valuation/risk purposes, it is enough that it is consider as an advance on interest due with the difference embedded in the notional and not a final interest amount.

In a recent consultation paper from the ECB, the feature of this approach has been incorrectly described as creating significant operational complexity, with more complex and less transparent calculation and relevant hedging issues expected. Based on the description provided above, it is clear that those element are inaccurate. As the paper does not provide any reference to relevant literature or explanation about the reason of those characteristics, we believe that further analysis of those issues are warranted.

One of the issues with compounded in-arrears mechanisms is that the payment has to take place on the same day that the final amount is known. This mechanism is not different from other in-arrears in that respect. In this context, the obvious advantage of the hybrid approach is that the issue appears only once, on the very last payment. The same range of solution discussed for the in-arrears can be used in this case also. This is a different discussion that is not debated here. Without doubt, the issues is easier in this case as it is relevant only on the last payment instead at each payment.

As mentioned above the operational ease and cash flow management issues are better in this mechanism. All cash flows, except the last are know at the period start.

The only small issues is the new notional computation. Computing the coupon for in-arrears on a 3 month coupon (60 business days) take approximately 120 multiplications and 60 additions. The notional computation in the hybrid case requires one extra multiplication and one extra addition. If the usual (credit/profit) spread is added to the picture, as the rate fixed in advance plays the same theoretical role as the spread, the extra complexity is only one addition.

In term of hedging, the notion of hedging ease or complexity is obviously relative to what is the target risk. Here we suppose that the target is to have not market risk and that the composition of overnight rates is considered risk free. In that case, most of the risk is on the composition and does not need any hedging. The only difference is that the notional is slightly changing at each period. The rate fixed at each period does not need any hedging, it is used as a repayment of part of the notional at each step. The addition of a spread may require a hedging in the same way as the addition of a spread may require a hedging with pure in-arrears coupons.

The credit risk of such a bond is not significantly different to the one of other bonds. No specific changes are required.

Advances on final bills are a standard concept in retail and services. There is no reason that such a simple and widely used concept would not be accepted by sophisticated participants in the financial markets.

We have contacted the ECB/Working group to require a correction of the consultation paper.

A preprint version of this text will be made available on a preprint server soon. The link will be added.

The new working paper related to the principal adjustment method for bonds and loans as been made available on SSRN:

Description of overnight floaters with principal adjustment and its advantages.

The paper is available on SSRN at