Almost five year after the notorious The Future of LIBOR speech, is the "lack of there of" part actually starting in the USD market?

The evolution away from LIBOR had to go through three phases (not necessarily disjoint): preparation, actual transition and disposal.

The preparation started slowly from 2017, a good part came at the start of 2021 with the ISDA fallback decisions. But up to now we have been far away from the actual transition. The new benchmark, SOFR, has been far away from being first as claimed by the different "SOFR First" initiative. Up to the week before last, we regularly reported on the "SOFR Third" truth. This is changing. We are still far from actual SOFR first, but there is clear signs of it being possible in the near future.

In Figure 1, we display our usual shares of SOFR, EFFR and LIBOR at LCH, currently the main clearing house for USD interest rate products. For the first time, the SOFR share is above the LIBOR share with 28.3% versus 23.0%. SOFR is still not at the first place as EFFR is leading with 44.1%. There is a general decrease in LIBOR volume but it does not go all to SOFR. 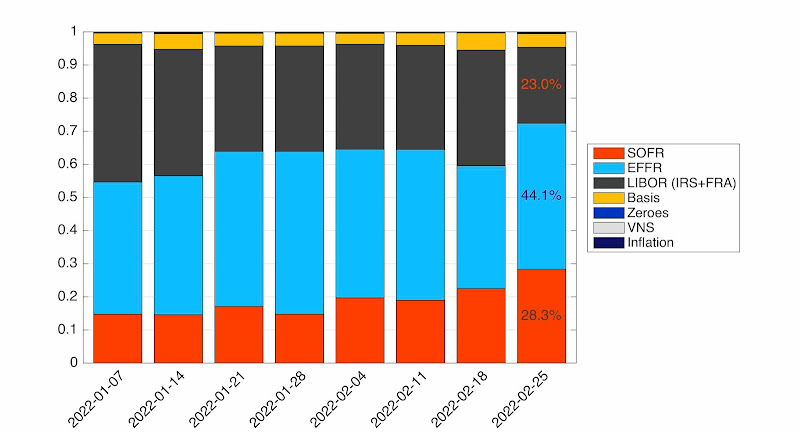 We also provide the SOFR volume in absolute volume in Figure 2. Over the last weeks, SOFR has not really increased, with the volume of the week ending on 11 February still the highest. The change has to be attributed to a decrease of LIBOR, not an increase of SOFR. 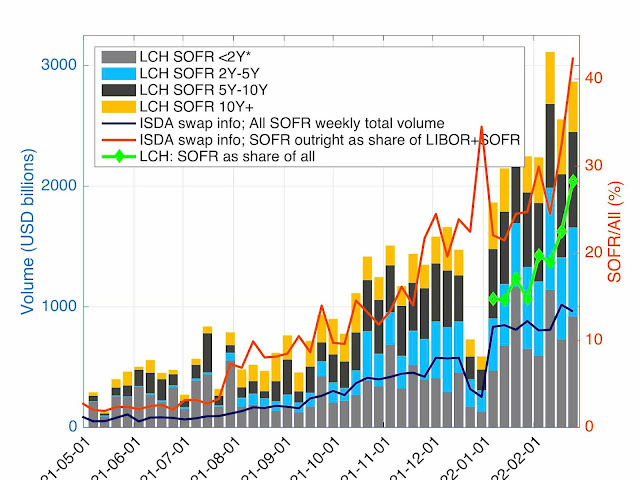 This lead us to some remark on the tenor distribution of SOFR swaps. In Figure 2 the share between the different tenor ranges is also provided. We focus on that part for the 8 first weeks of 2022 in Figure 3 and we add the same numbers (same scale, same colors) for ESTR. 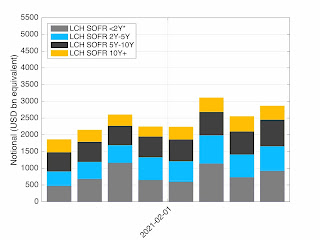 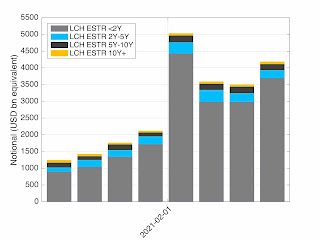 What comes out clearly in this comparison is not really that the volume of SOFR is smaller but that the short term part is significantly smaller. With the expectations of monetary policy changes, the short term volume (gray in the figures) increased significantly for ESTR but not for SOFR.

This is a problem in the building of the Term SOFR that would be useful for the transition and fallback. Remember that GBP and JPY LIBOR have now a synthetic version based on Term SONIA and TORF. The CHF does not have a term SARON and the EU regulation had to invent a tortuous way to deal with this absence. One may argue that there is already a Term SOFR, but it is based on futures, uses arbitrary interpolation scheme and is not using point-in-time fixing mechanism; it is not ideal for hedging and difficult to replicate in the market. The large part of the EFFR volume is probably on the short term. SOFR is replacing LIBOR as a long term interest rate risk management tools but does not seems to win the heart of market participants as a monetary policy risk management tool.

Note (2022-03-02): A first version of the Figure 3 graphs were missing the last two weeks. The graphs have been updated.