There have been a lot of discussions around ESTR, SOFR and SONIA over the last years. The interest rate derivative market was quite symmetrical between those currencies up to a couple of years ago. The market was dominated by one IBOR benchmark (EUR-EURIBOR, USD-LIBOR, GBP-LIBOR) with a decent overnight benchmark (EUR-EONIA, USD-EFFR, GBP-SONIA).

The three currencies have used different paths in their benchmark transition. On the overnight side, the GBP has changed the meaning of the overnight benchmark (April 2018) but has kept its name unchanged. The USD has created a new benchmark (SOFR, April 2018) and has kept the existing one (EFFR). The EUR has created new benchmark (ESTR, October 2019) and has at the same time changed the meaning of the old one (EONIA) and in a second time (January 2022) stopped the publication of the old one.

On the IBOR side, in GBP the LIBOR is declared non-representative from January 2022, will continue to exists to December 2022 in a synthetic form and its status for after January 2023 is still unknown. In USD, LIBOR is declared representative to June 2023, but new LIBOR trades should stop from January 2022; its publication will probably stop after June 2023. In EUR, EURIBOR will continue and there is not planned publication discontinuation.

Looking only at the trades indexed on the new overnights (SOFR, ESTR, SONIA), one would expect a split where the EUR portion is inferior - EURIBOR continues - and a relative split between GBP and USD - both LIBORs should not be traded as of next week. What we see is very different. Taking only into account the last 8 weeks with published data at LCH, we have 24.0% for USD, 27.9% for EUR and 48.1% for GBP. The weekly comparison is provided in Figure 1. Even when compared with EUR, for which there is less overall volume and for which the IBOR will not stop, the SOFR volume is inferior. We are still far away from SOFR first. We will see what 2022 bring on that front. 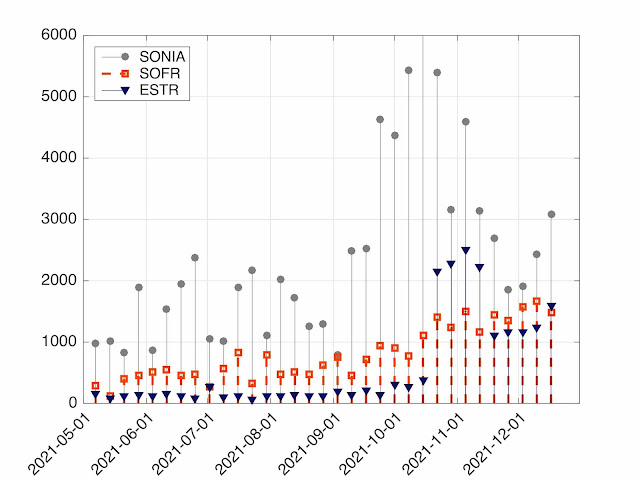 Unfortunately, the volume for OTC trades on the other USD Credit Sensitive Rate BSBY are not available. For the futures, some figures were provided in a previous blog; USD SOFR First in numbers - 22 Dec 2021.

Posted by muRisQ Advisory at 11:55