The transition from EFFR to SOFR as collateral rate has an important impact in term of valuation. This change is very different from the change from LIBOR discounting to OIS discounting. The LIBOR/OIS discounting was a change of valuation formula from one that was used up to then to a new one that the users though was better. It was a correction of an internal valuation process but there was not change in the term sheet of the products. The pay-off were unchanged. No compensation was required.

The collateral transition is a very different prospect. In this case, the term-sheet of the trade, through its CSA - uncleared trades - or rule book - cleared trades -, is altered and the pay-offs, at least the ones associated to the payment of interest on the VM are changed. That change of term-sheet requires a compensation.

In the uncleared work, the compensation scheme has to be agreed by both counterparties to the trade. In the CCP world, the clearing house is the calculation agent and they may have the right to do the change at their own conditions, but there is still an expectation that this will be done in a fair way for each participant. The compensation for the change of collateral rate is not a standard variation margin for which the exact formula has a small impact; this is a fundamental transfer of value. It has to be computed very precisely and is a definitive value transfer.

The change is composed of two parts: The change of level between the two rates and the specific details of the rate on each day. Historically the difference between SOFR and EFFR has been a couple of basis point on average, with SOFR higher than EFFR. That difference is reflected into the basis swap for SOFR v EFFR. The change due to daily idiosyncrasies and intra-month seasonality is more complex. The quoted rate are for monthly or even yearly periods; the liquid market does not provide information about single days. Moreover, a good forward curve should replicate the shape of historical data with steps between FOMC meetings and on top the intra-month seasonality for SOFR.

In this note we concentrate on the intra-month seasonality. We suppose that the difference of average level has been taken into account and does not need to be look at anymore.

Methods to incorporate the seasonality in the curve was described our recent blog Fed Funds to SOFR: Impact of seasonality. In this blog we look at the monetary impact of that seasonality. By definition, on average the impact is null. But that impact will be spread between the different parties in a different way and some parties may be advantaged by the methodology selected. Some parties may position themselves in such a way to take advantage of the transfer.

Historically the SOFR rates have been higher on month end, in the first days of the month and around the 15th of the month. We create positions with a total PV01 equal 0 but with an impact on the value due to expected idiosyncratic spikes. The impact on value is estimated by valuing the portfolios with one forward curve including the seasonality and one without seasonality.The seasonality we use for this analysis is the one we have described in the previous blog.

The first example has a 6 month tenor and a fixed rate of 2.50% (not too far away from ATM). The swap is fixed semi-bond versus LIBOR-3M quarterly. The total PV01 for the discounting is by construction 0.00 USD. The total impact of the seasonality is 4.23 USD. From a pure PV01 comparison perspective, it seems that the change of discounting curve should not have any impact on the value but we still see some impact even if restricted. The bucketed PV01 is provided in Figure 1. 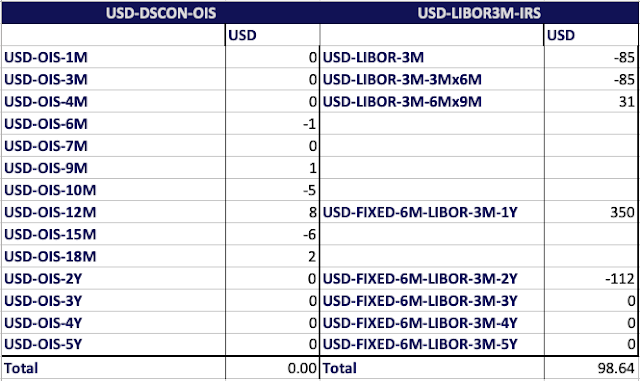 We could also have selected to have a total PV01 of 0 (not the discounting one equal to 0) or even all of them equal to 0 by adding small ATM swaps at each maturity. The results would not have been altered significantly.

In the second example, we look at a longer swap with a tenor of 2Y and a coupon of 10%. it represents the end of a long term swap that was traded some years ago when the rates were significantly higher than today. The maturities are 31-Jan-2021 and 5-Feb-2021. The bucketed PV01 is provided in Figure 2. Again the total PV01 for the discounting curve is 0. In this case the impact of seasonality is USD 1,842.38. Again that may look small but this is out of a PV01 of 0 for which the expected impact would have been close to 0. 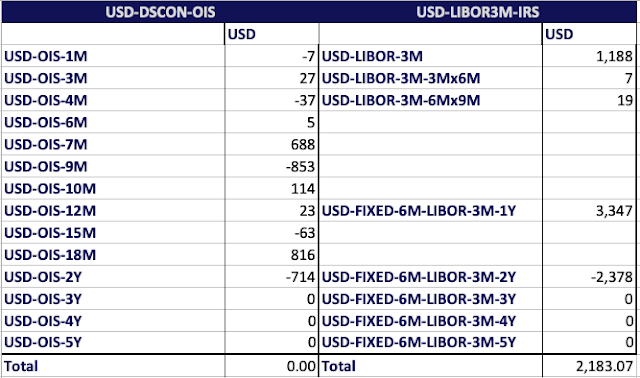 Figure 2. Bucketed PV01 of a 2-year swap with a large fixed coupon.

We could have increased that impact by taking longer maturity swaps or focusing on end-of-year impacts. Note that the 1-Jan-2021 is a Friday and the end of year will be on a 4-day period. If we take a pair of zero-coupon swaps traded at the end of 2007/beginning of 2008 and ending one week apart around the end of 2020, we obtain a difference larger than USD 7,000. This was obtained with a end-of-month average spike of 13.5bps. If we were to use last year end-of-year spike which was above 60 bps for a couple of days, we would obtain impact larger than USD 30,000.

The amount above were obtain with a notional of 2 billions (1 billion in each direction). Given that the total outstanding amount at LCH is 150 trillions, the theoretical potential impact on valuation of the seasonality could be above 100 millions if the feature of dates of the second example was representative of the composition of the CCP book.

What is the impact of seasonal adjustment on your book? Do you have tools to incorporate the seasonality in your valuation mechanism and check if the proposed compensation for change of collateral/discounting is a fair compensation for your own book?

Don't hesitate to contact us to discuss how we can help in this process.
Posted by muRisQ Advisory at 19:26