In USD and EUR, the main overnight benchmarks will be transitioning from a long serving benchmark to a relatively new benchmark.

In USD the current main benchmark is the Effective Federal Fund Rate (EFFR). The Secured Overnight Financing Rate (SOFR) which should replace it is published since April 2018. The transition to SOFR is relatively slow with only 0.2% of the notional traded in SOFR swaps with respect to LIBOR swaps year-to-date according to ISDA data.

In EUR, the current main benchmark is the EONIA. The Euro Short Term Rate (ESTER) which should replace it will be published from 2 October 2019. Due to the recalibration of the EONIA rate to ESTER plus a spread on the same date, it is expected that the EUR transition to the new benchmark will be a lot faster than the USD transition.

Once those new benchmarks are in place, one of the the most important change in the market will be to transition to that benchmark as reference rate for cash collateral. This is very important as the collateral rate is used in the valuation of all derivatives subjects to the Variation Margin (VM) in cash with the rate paid on the collateral referencing the benchmark. The details of the pricing mechanism in this context can be found in (Henrard 2014, Chapter 8).

Even if the main benchmark for collateral and the OIS market has switched to the new benchmark, there will still exists legacy trades referencing the old benchmark. Also we can expect that the most liquid market for the old benchmark will be based on overnight/overnight basis swaps.

If the market is moving in that direction, what will be the impact on delta risk of an OIS? We have tried to answer to that question with a simple example.

We used a USD 10Mx5Y OIS referencing EFFR. If we look at it in the current framework with EFFR collateral and with the most liquid market based in vanilla EFFR OIS, the risk is straightforward. It is displayed in Figure 1 below. 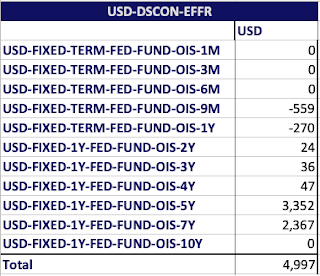 Figure 1: Delta for an OIS with cash variation margin and interest computed on the same benchmark as the OIS.

The main risk is between 5Y and 7Y at the maturity date and there is some risk between 9M and 12M at the effective date in the opposite direction.

If we look at the same trade in the expected new configuration, two things will change: the discounting will be done on SOFR and the most liquid market for EFFR will be based on basis swaps. The current standard for the SOFR/EFFR swaps is to quote the spread on the SOFR leg; this may change at some stage when SOFR becomes the standard. The delta risk in the new configuration is displayed in Figure 2.

Figure 2: Delta for an OIS with cash variation margin and interest computed on a different benchmark than the OIS. The market quotes the benchmark underlying the OIS through basis swaps.

The risk still appear on the same tenors. But now we see two risks. The SOFR risk and the basis risk. When a SOFR OIS rate increases and the spread is unchanged, EFFR rate increases through the basis swap. When the SOFR OIS rate is unchanged and the spread increases, EFFR increases also. This is why is seems that there is a duplication of the risk. The pure discounting (the coupon is not ATM) explain the small figures in the nodes 2 to 4 years. That risk appears only in the discounting and not in the forward. It is visible in Figure 1 in the EFFR column and in Figure 2 in the SOFR column.

The code that produced the above delta ladders can be found in the OvernightOvernightNodesCalibrationAnalysis class of the Analysis repository on Marc's Github repository.