The USD market is in transition between Effective Fed Fund Rates (EFFR) and Secured Overnight Financing Rate (SOFR) as the main overnight benchmark.

Once the transition will be completed, the main source of liquidity for OIS will be based on SOFR. For the OIS transition, the change will be gradual. The new OIS trades will be more and more linked to SOFR, but the legacy trade already entered into and linked to EFFR will not be directly affected.

Currently, the EFFR is not only used as the underlying for OIS but also, and maybe more importantly, used as the reference rate for the payment of interest on the Variation Margin (VM). The rate for VM is usually described in a CSA (non-cleared) or the house rule book (cleared). For the usage of the overnight benchmark in collateral, it is expected that the transition will be more "brutal". For example, LCH and CME have announced that they plan to switch from EFFR to SOFR at some stage in 2020. The switch will be done on one day, without gradual transition and without possibility for the members to switch from one to the other at their own pace.

The change of collateral rate impacts the present value of all the trades through the discounting. The exact details of the collateral discounting approach can be found in (Henrard 2014, Chapter 8). The collateral rate is part of the term-sheet of the trade (through the CSA or the rule book) and a change of term-sheet must be compensated in some way. To estimate the compensation, you need two ingredients: the difference of average between the two rates and the difference of "local behavior". In the case of EFFR v SOFR the difference of local behavior is the intra-month seasonality. As can be seen in Figure 1, the SOFR rate, based on a wider market, has some very clear seasonal behavior. In particular, one can see sharp rate increases at month-end that subside for a couple of days and some sharp increase around the 15th of the month, even if to a lesser extend. 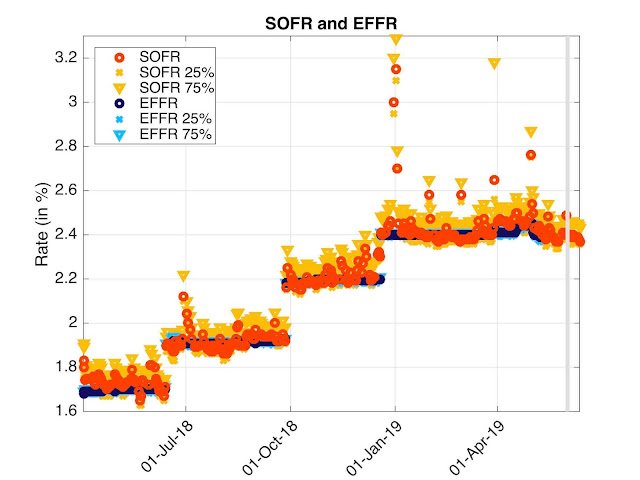 Figure 1: Historical data comparison between EFFR and SOFR (most recent data missing due to issue with the Fed website).

For the calibration presented here, we used OpenGamma's Strata library as the starting point. The library is very flexible in term of curve calibration and it is easy to extend and incorporate your own curve mechanism in it.

We have added a new type of curve. It consist of a "fixed curve", in which we incorporate the seasonality, and a variable main part. The two parts put together form a unique curve. We call the first curve fixed as we have created it from our historical data analysis and it will not be changed in the calibration procedure. The variable part is the one that will be calibrated.  Just to reiterate, we have one curve, which internally is divided in two parts, and we calibrate that one curve to the market. There will be no adjustment after the calibration. The one step calibration include both the general shape and the seasonal adjustment.

To match the usual shape of the overnight rate behavior, the main curve is interpolated using log-linear interpolation on the discount factors with node on the FOMC date. In that way the overnight forward rates follow a piecewise constant shape with jumps at the FOMC meeting dates (see Henrard 2014, Chapter 5 for the details).

We did the calibration described above with and without adjustment for seasonality. The calibration was done with market data from 21-Jun-2019. The non-adjusted curve is presented in Figure 2 and the adjusted one is added in Figure 3. Figure 4 depict the difference between the two. 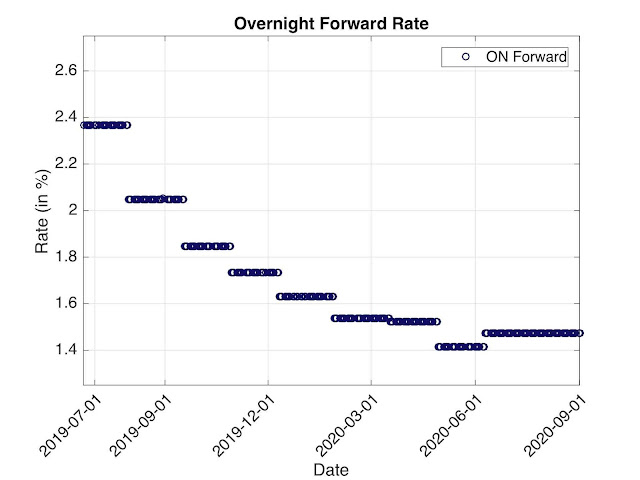 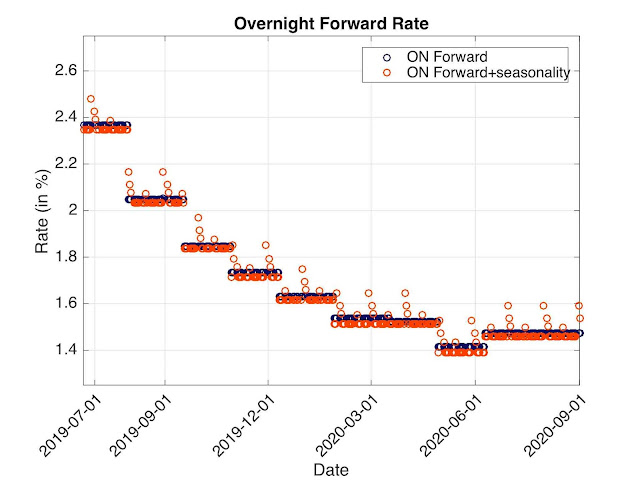 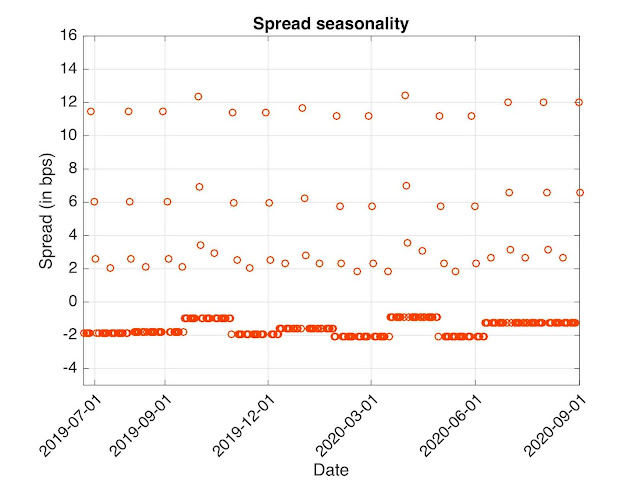 Figure 4: Spread of forward overnight rates implied by the curve calibration with and without adjustment to intra-month seasonality.

In the difference one can see clearly the month-end and first days of the month impact and also the 15th of the month impact. Even if the above impacts have a fixed amplitude, the impact on the other part is not always the same. The reason is that the length of the months are different and in some cases, some of the dates above span a three calendar days period instead of one.

The code will be added to the muRisQ-ir-models open source library at a later stage.